Stingray City in Grand Cayman is a place where reality exceeds even the most vivid imagination. Enter the world of Stingray City Cayman where you will be mesmerized by the antics and charm of these fascinating sea creatures.

Stingray City is situated in a shallow 10-15 foot sandbar in Grand Caymans north sound. Stingray City Sandbar is immediately adjacent to the main channel that passes through the barrier reef to Caymans North Wall. Caymans Southern Stingrays are bottom dwellers that feed and play in sandy bottom areas such as Stingray City so you will be interacting with these beautiful friendly animals in the comfort and safety of their own environment.

Stingray City is ideal for extended diving and snorkeling. Both Stingray City and Stingray City Sandbar are situated in relatively shallow water. Stingray City averages 12 feet in depth while Sandbar is slightly shallower with depths ranging from 3-10 feet. Collectively, they are frequented by 30-40 friendly stingrays every day who are eager to make your acquaintance and find out what you brought for them to eat.

If ever there was a true "must-do" for water enthusiasts, this is it – diving and snorkeling at Stingray City in Grand Cayman.

Book Your Cayman Islands Stingray City Tours Now – SAVE and Avoid the Crowds!
Stingray City Tours The first Stingray City tours were inadvertently conducted by Cayman fishermen during the early 1950s. Upon returning from a day of fishing, the fisherman would clean their catch in the calm shallow waters near the north sound, which would later become known as Stingray City.

Throwing their unused bait and catch cleaning overboard, Cayman’s early fisherman unknowingly sponsored a free smorgasbord of delights to the stingrays below. There are several species of stingrays in the Cayman Islands but Stingray City and Sandbar are primarily populated with Cayman’s Southern Stingray. While Stingray City and Sandbar are two entirely separate sites, they are commonly referred to collectively. Stingray City is actually a 15-20 foot dive site on the western end of Cayman’s North Sound; Sandbar is a mere 3-6 feet deep and situated near the middle of the North Sound. Divers prefer Stingray City, which its somewhat greater depth, which affords easier and more diverse photo opportunities. Sandbar is more suited to snorkelers with its typically crystal clear shallow water.

Grand Cayman Stingray City attracts divers and snorkelers from all over the world. Organized Stingray City tours from our recommended operators will ensure the absolute highest value for your Cayman Islands Stingray City adventures.

Stingray City Snorkeling Snorkelers will prefer Stingray City Sandbar to Stingray City the dive site because of the shallow 3-8 average ocean depths. All of our recommended Stingray City snorkel companies provide complete instruction and food to attract the Stingrays.

Stingray City Diving When diving at Caymans Stingray City always choose a Cayman Dive or Snorkel Company who takes only small groups of less than twenty divers. Wear extra weight and sit comfortably on the bottom as you watch the show as you divemaster attracts the stingrays with fresh squid. Stingrays will quickly surround you as they perform underwater acrobatics before your eyes. Caymans Southern Stingrays will rub against you and gently caress your body with their soft sandpaper textured wings. Stingrays can be somewhat aggressive while feeding but they will not sting or bite you – in fact they don not even have teeth, unless you threaten or attack one of them, which is nearly impossible unless you have a propensity for forcibly pulling their tails or stomping on them.

Divers will want to ask their Cayman Islands dive operator to take them to Stingray City instead of Stingray City Sandbar so they will have enough depth so settle comfortably on the sandy bottom. 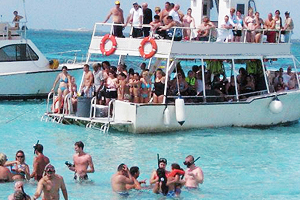 Stingray City can become quite crowded when cruise ships are in port, as many cruise ship tour operators take as many as 150 passengers on a single boat!

There are two ways to avoid the crowds:

1. Check our Cayman Islands cruse ship calendar (forum registration required) to see how many ships will be visiting Grand Cayman and pick a day with the fewest number of ships. Friday through Sunday will typically have the fewest or no cruise ships calling on Grand Cayman so those are the best days to go if your vacation itinerary permits; 2. Use our recommended Stingray City dive or snorkel operators – who all average 12 passengers or less

Fortunately for scuba divers the overwhelming majority of cruise passengers visit Stingray City Sandbar where the 3-10 foot waters are too shallow to warrant scuba diving anyway. Overnight visitors not only have the luxury of picking the best day to visit Grand Caymans Stingray City but can also dive a standard two tank profile in the morning and enjoy the show at Stingray City in the afternoon.