Comfort Suites Resort Spacious & affordable suites with free continental breakfast. Kitchens, ocean views, on the beach, with the water only 50 yards away. One of the best resort deals on the island.

Grand Cayman Beach Suites (Formerly Hyatt Beach Suites) Luxury 5-Star Resort with every conceivable amenity. Two of the finest award-winning restaurants, Hemingway’s and Bamboo on site. Full kitchens and extremely upscale furnishings. Championship golf course on site. Without a doubt, one of the finest and most upscale resorts in the entire Caribbean.

Marriott Beach Resort Deluxe Ocean-Front Resort. Completely remodeled with a delightful upscale Caribbean flare, you would expect to pay much more at this prestigious all amenity resort. Two fantastic restaurants on site, shops, music, entertainment, arts and local culture. One of the best landscaped resorts on the island. Close to everything in the heart of Seven Mile Beach.

Sunshine Suites Resort Cayman’s most affordable all suite resort, located directly across from Seven Mile Beach. Spacious suites, restaurant and full resort amenities at a fraction of the cost of most other resorts.

Turtle Nest Inn Outside Link – Be sure to request the Special Activity Guide Member Rate! Cayman’s most affordable beach front property. Not a full blown resort but some of the nicest people and cleanest rooms you will find. Excellent snorkeling on a pristine beach, well away from any crowds or traffic. A car and early reservations are highly recommended at this popular remote Bodden Town property.

Prior to 1948 the closest thing to Cayman resorts were humble waddle and daub abodes, which were home to Cayman’s early settlers, delighted to meet and introduce visitors to their then rugged and pristine island paradise. In those days ‘paradise’ was more a state of mind, adventure, tranquility, culture and friendship. Technology was virtually nonexistent and 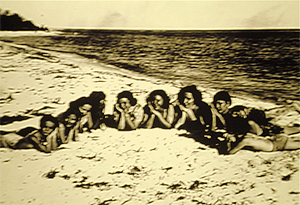 mosquitoes ran rampant. Yet for all its ruggedness, the natural beauty and charm of the early Cayman Islands and its inhabitants created lifetimes of cherished memories for all the early visitors to roam her shores, long before the first modern resorts were constructed in the Cayman Islands..

In 1948 the first weekly air service was established via seaplane, followed in 1950 by the first official Cayman resort—Bay View Hotel, located on Grand Cayman’s west coast in what would later become Seven Mile Beach. In 1951 Galleon Beach and Sea View Hotel spotted the seaside, at a time when no structures rose higher than a coconut palm tree. Bob Soto began operating Cayman’s first official dive company and the hotels and resorts offered on site restaurants and amenities for divers.

In 1952 Owen Roberts International Airport (named in memory of the aviator of the first passenger sea plane) opened and remains Grand Cayman’s sole airport. The first commercial bank, Barclays Bank, opened a branch in George Town the following year, followed shortly by Cayman National Bank. The island’s airline, Cayman Airways, was formed in 1968 with the purchase of 51% of the shares by the Cayman Islands Government from Cayman Brac Airways, with LACSA, the Costa Rican airline, holding the remaining 49% of shares. Today Cayman Airways is fully owned by the Government of the Cayman Islands.

The census of 1943 listed the main industries of the Cayman Islands as seamen, agriculture, services, construction and fishing, with a combined workforce of 2,531. By 1960 this figure rose to 3,145 with little change in occupations. During this period of rapid growth, the Cayman Islands transformed into one of the most popular visitor destinations in the world, boasting several hotels, resorts, condominiums and guest houses.

In 1966 the Cayman Islands Tourist Board was established, closely followed by the Mosquito Research and Control Unit (MRCU) with development aid from the United Kingdom. The effectiveness of the MRCU contributed to the level of development in the Cayman Islands and its ensuing widespread popularity among visitors from around the world.

As of 2008, the Cayman Islands have room stock of over 4,000 rooms, encompassing everything from the most basic accommodation to lavish five star resorts with every conceivable amenity.