Book Your Cayman Islands Reef Dives Now – SAVE and Avoid the Crowds!
After an appropriate surface interval, your second dive will be a 40-60ft Cayman reef dive or shipwreck. For most Cayman reef dives, our recommended dive operators offer a choice between a guided dive or a buddy dive, with the latter allowing you to pursue your individual interests at your own pace.

Cayman reef dives typically range in depth from 30-60 feet. Always begin your Cayman reef dive at the maximum depth planned and gradually ascend throughout your dive. Continuing your ascent alongside the Cayman reef as the sunlight gradually intensifies, you will notice a progressive increase in the spectrum of color. Fish, corals, sponges and fans will begin to impart their true resounding brilliance. Listen to the soft sublime sounds of the clicking of the snapping shrimp and the parrot fish pecking away methodically at the hard coral.

On the sandy bottom of most Cayman reefs you will encounter conch, flounder, garden eels and hermit crabs. Small holes & crevices frequently house eel, shrimp, crab, octopus and lobster. Look for outcrop pings and overhangs to swim under; they are usually occupied by tarpon, grouper, silverside and numerous species of fish who prefer shade.

Shine your light along the top and inside walls to reveal sponges, corals, algae and tunicates in a sparkling array of vibrant colors. Tube sponges are often home to tiny shrimp and goby fish. Brittle star, cowrie and nudibranch often inhabit sponges, sea fans and coral.

Dive computers will allow more bottom time and safer dives, even on Caymans shallower reef dives. A dive computer is one of the best investments divers can make to maximize the safety and duration of all Cayman Islands dives. If you do not have a computer you can rent one from any of our recommended dive operators.

Grand Cayman north reefs include Lemon Reef, Sea Fan Reef and Stingray City. Reefs on the northern side of Grand Cayman are among the most pristine in the Cayman Islands. Many dive operators will include a north wall reef as the second dive of a two tank profile.

Grand Cayman west reefs include Eden Rock, Lone Star and Spanish Anchor. Corals on the west side of Grand Cayman are some of the most prolific anywhere in the Caribbean. Thriving on the rich nutrients of the deep surrounding waters, corals, fans, rods and thousands of species of fish and corals populate the relatively shallow reefs system on the western side of Grand Cayman.

Grand Cayman south reefs include Japanese Gardens, Waldo’s Reef and Smith Cove. Winds in Grand Cayman typically prevail out of the east. However, during winter months the Cayman Islands receive the occasional low pressure system, locally referred to as a Nor’Wester. Since the wind does not usually blow in more than one direction at a time, the south shore of Grand Cayman becomes the lee or calm side of the island during periods of northerly or north westerly winds. Because the reefs on Grand Cayman’s south shore are not visited as frequently as the other parts of the Cayman Islands, the south reefs are among the most pristine anywhere.

Grand Cayman east reefs include Lost Anchor and Grouper Grotto. Access to east end reefs are somewhat limited and most are 100 yards or further from shore. The winds prevail out of the east on Grand Cayman making shore diving the eastern reefs typically the most challenging and we recommend them only for strong swimmers in excellent health and advance divers.

Cayman reef diving is among the most relaxing and enjoyable experiences, with shallower depths affording ample bottom time to familiarize yourself with Cayman’s intricate reef system. Diving Cayman reefs will expose you to thousands of species of fish and coral, brilliantly illuminated in Cayman’s shallow waters. A flashlight is highly recommended for all Cayman reef diving even during daylight hours to further enhance the colors and detail of Cayman reefs, particularly in areas shaded by outcrop pings, caves, tunnels and allow the true brilliance of nature’s colors to reveal themselves. 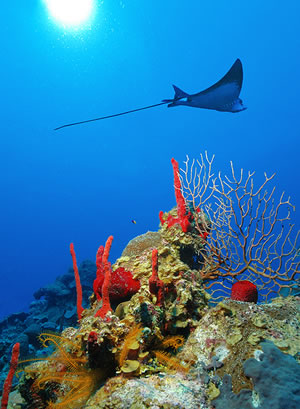 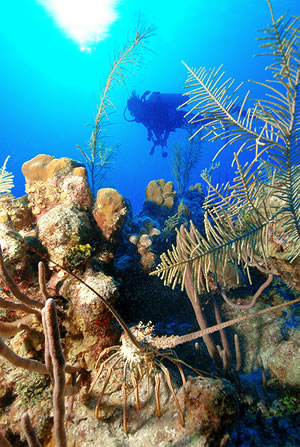 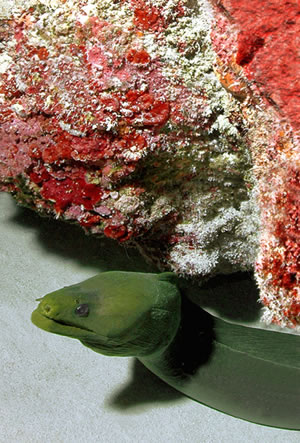