Book Your Cayman Islands Wall Diving Now – SAVE and Avoid the Crowds!

Your Cayman Islands wall dive adventure usually begins with a 2-tank morning dive. The first dive is typically a guided wall dive with a maximum depth of 130 feet for 20 minutes. All of our recommended Cayman dive operators allow computer diving which can considerably extend bottom time.

There will usually be a 40-60ft sandy bottom under the boat; this is a good place to get oriented, fine tune your buoyancy, check your gauges & camera/video equipment and make sure your buddy is comfortable.

Your journey to the wall will commence through or over tunnels, chutes and caverns populated with lobster, shrimp, crab and copious species of fish and bottom dwellers. Look (but do not reach) into little nooks and crannies along the way and you may spot a moray eel gazing back.

Once you reach the spectacular Cayman wall, maintain an ongoing vigil for Spotted Eagle Rays who soar gracefully like giant graceful birds flying in slow motion. Turtles and (occasionally) sharks can also be spotted swimming along Cayman’s sheer walls.

Black coral can be found near depths of 100ft, usually under outcrop pings or inside tunnels; soft and bush-like, it will appear light brown or white in color. Do not touch it! Black coral is extremely delicate and grows a mere inch every 2-3 years.

Large orange elephant ear sponges adorn many Cayman walls near depths of 70-130 feet. Use your flashlight or camera strobe to light up the brilliant orange colors of these amazing structures adorning many of the most popular wall dives in the Cayman Islands.

As you make your way back to the boat you will have an opportunity to explore the top of Cayman’s dramatic walls in depths of 40-60ft. Here, you will find a vast biodiversity of fish, soft corals, fans and sponges to capture your intrigue right up to your very last minute of bottom time.

Grand Cayman is the largest of the three islands, residing approximately 150 miles south of Cuba and 180 miles northwest of Jamaica. Grand Cayman is 22 miles long and 4-8 miles wide, almost completely surrounded by coral reefs. The unique formation of Grand Cayman creates the famous Grand Cayman walls, which attract divers from around the world. With drop-off beginning as close as 30 yards offshore, to a depth of over 6000 feet, wall diving in some parts of Grand Cayman can even be done from shore, for experienced divers in good health and very comfortable in the water.

Owing to the porous limestone rock, or iron shore, The Cayman Islands are devoid of any rivers or streams, which results in a lack of runoff, creating the best visibility in the entire Caribbean. Typical visibility on a Cayman wall dive will be at least 100 feet and often exceed 130 foot vertical visibility. Grand Cayman’s highest elevation is 60 feet above sea level, which results in refreshing year round tropical breezes and calm, clear water. Trees, bushes and vines grow luxuriantly—including rampant coconut palms, thatch palms, sea grape, and casuarinas, which resemble pine trees.

Grand Cayman offers dramatic and diverse Cayman Islands scuba diving as the product of geology, which played a key role in fashioning the Cayman Islands into one of the most sought-after watersports destinations in the world. Residing atop the peak of a sheer submerged mountain range, the Cayman Islands are surrounded by the Cayman Trench. The northern edges of the Trench form the massive wall known as the Cayman Ridge, which plunges dramatically to depths in excess of 25,000 feet, making it the deepest point in the Caribbean sea. This drop-off (or ‘wall’) commences its vertical descent approximately 100 yards from shore where depths range from 40 to 60 feet. When you dive Cayman, you can expect to see an abundance of sea life on every Cayman dive.

Computer diving these days is much more the norm than the exception; particularly among the relatively more experienced divers who frequent the Cayman Islands. If you do not own a dive computer, they are available for rent from all of our recommended Cayman dive operators for under US$20/day. Grand Cayman dive operators charge by the trip and not by your bottom time so a computer can quickly return your investment through much longer dives.

Grand Cayman’s North Wall extends from the northernmost tip of West Bay to East End and is generally considered to be the most esteemed diving area among Cayman wall dive enthusiasts; and acclaimed by most international dive publications. With some of the island’s steepest and most breathtaking underwater drop-offs, Grand Cayman’s North Wall is one of the most sought after wall dive destinations in the world. Grand Cayman’s north wall is also home to Stingray City and Stingray City Sandbar, which consistently rank among the most famous dive sites in the world by virtually every international dive publication. As recently as 2008, Scuba Dive Magazine ranked Grand Cayman’s Northwest Point area and Stingray City as the number 1 and 3 dive sites in the world, respectively. The north wall of Grand Cayman boasts a variety of Stingrays, Spotted Eagle Rays, several species of sea turtles and over 1,000 species of fish and coral. Famous Cayman north wall dive sites include: Black Forest, Eagle Ray Pass, No Name Wall, Princess Penny’s, Tarpon Alley, and Babylon. The most popular shallow dive in the entire world, Stingray City, is two separate locations, each residing near the north wall of Grand Cayman.

Grand Cayman’s South Wall lies somewhat farther from shore and is generally only frequented during times of nor’ westers, which are cold fronts causing high seas that prohibit wall diving on most other parts of the island. Grand Cayman’s south wall sustained the greatest damage during Hurricane Ivan in 2004 but as it is one of the least dived areas of the Cayman Islands, it has already recovered remarkably. Cayman’s south wall commences its drop somewhat deeper than the north or west walls, between 70-90 feet, which is; more consistent with Cayman wall diving on East End, which also start somewhat deeper. Cayman’s south wall is better known for some of its shallower sites, featuring spectacular displays of elk horn and stag horn coral formations; mazes of swim through’s and intricate rock and coral formations. Favorite sites include: Japanese gardens and Della’s Delight, which are not wall dives but will provide some of the most spectacular second site shallower diving anywhere in the Cayman Islands. Cayman south wall dive favorites include Hole in Wall, Little Pinnacle and The Sisters.

Grand Cayman’s West Wall offers the best consistency and overall variety for both novice and beginner wall divers. Featuring intricate swim through’s, tunnels, chutes, caverns and topography, the west wall of Grand Cayman is also famous for much of the photography seen in "The Firm". Some of the most famous wall dive sites on Grand Cayman are along the west side and include: Big Tunnel, Orange Canyon, Trinity Caves, Sand Chute, Northwest Point and Bonnie’s Arch, the latter being a somewhat shallower dive and while perhaps not technically considered a wall dive, a definite must do by any dive standard.

Grand Cayman’s East Wall is among the most pristine of Cayman’s wall dives however the prevailing winds out of the east make this area the roughest in the Cayman Islands. Because East End wall dives are much less frequented than any other wall dive sites on Grand Cayman, they remain in remarkable condition and feature a variety of canyons, crevices and swim-throughs. Favorite east wall dive sites include: wonderland, Grouper Grotto, Iron shore Gardens, Jack McKennedy’s, Mermaid Point Drop-off, Omega Reef, Pat’s Wall, Split Rock, and Three Sisters.

The Cayman Islands consistently win virtually every award a dive destination can achieve for wall diving, including most vertical rise, abundance of sea life and exceptional visibility. Wall diving in the Cayman Islands will be one of the most exciting and rewarding adventures any diver will ever experience. 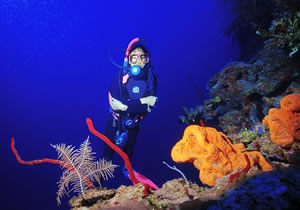 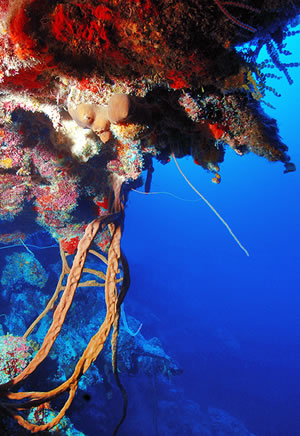 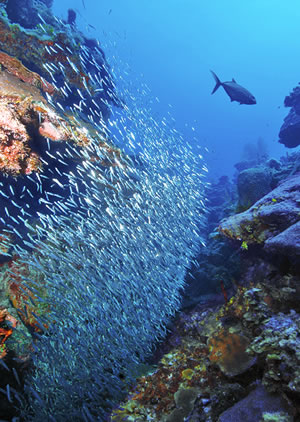 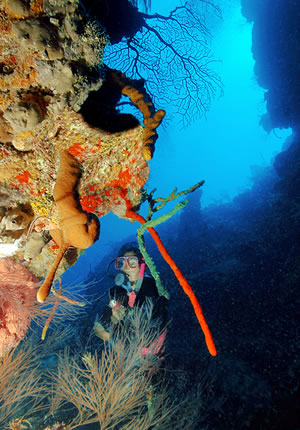 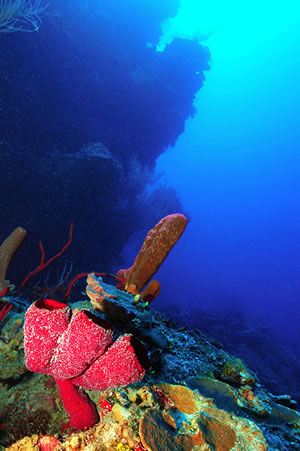 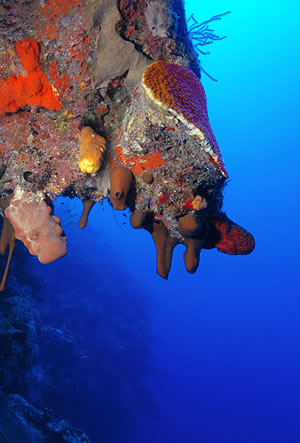 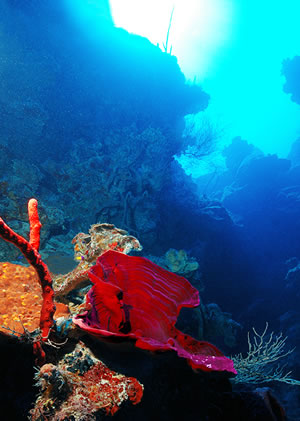